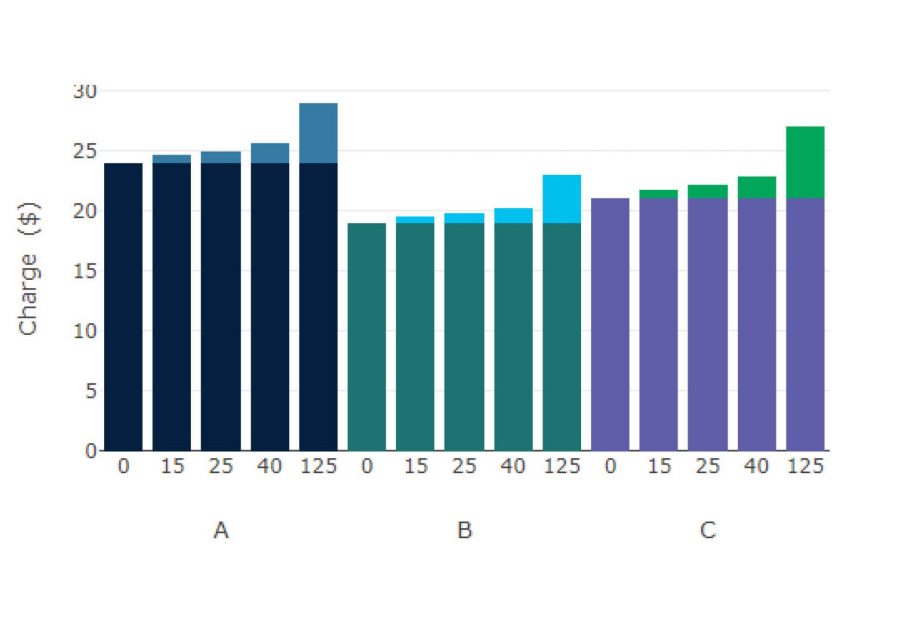 The new Community Cost Comparison tool gives you the ability to visually compare your municipality’s water and wastewater rates, both against other communities and across billing classes within your own community. No billing data is required for this analysis, you’ll only need your rate structure and the rate structure of any other community or communities that you wish to compare to (which are readily available online).

Benchmarking against other similar communities

Benchmarking is the practice of ranking and evaluating an organization’s performance against peers and industry standards. It is a common business practice used in government and private sectors. For municipalities it encourages continuous improvement, awareness of ranking among peers, as well as sharing knowledge and best practices. Benchmarking against other similar communities helps water system managers make more informed decisions about the fairness, affordability and sufficiency of their rates.

Benchmarking rates against other comparable communities is also a preferred method of analysis for elected officials because it lends to the credibility and defendability of a rate change. So for you, the water system manager presenting a rate case, the Community Cost Comparison tool is helpful in demonstrating to your board why proposed rate changes are fair and on par with comparable communities.

It is important to note that no two communities are identical, and rates suitable for one community are not necessarily transferable to another. However, if your community is looking to update rates that are insufficient, this metric is useful in showing the gap between your town and similar town(s) whose rates are known to better reflect their cost of service.

To get started, simply add your own rate structure (which you may have already done in Waterworth’s Rate Card Manager) and any other municipality’s or municipalities’ rate structure(s) that you wish to compare against. Compare different rate designs as well, such as uniform rates versus increasing block rates. In the example below, Waterworth visually demonstrates how much a residential customer in Community 1 pays for a cubic meter of water compared to what residential customers in Community 2 and Community 3 pay for that same amount of water.

Rate structures of the compared communities (the source data of the graph above).
Click to enlarge

Comparing within your community across billing classes

The new Community Cost Comparison tool also gives you the opportunity to visually compare what equivalent customers in separate billing classes would pay for the same amount of consumption, including the Median and Averages of those charges across the board.

Whether you are displaying per consumption charges, minimum charges, decreasing block, increasing block or uniform rates, enter these rate components into Waterworth’s Rate Card Manager and the Community Cost Comparison tool displays the data side by side.  In this example, Waterworth comparatively displays data from three different billing classes (Industrial, Rural and Residential) within the same system, followed by the median and average values. Both fixed and variable fees are represented.

Using the Community Cost Comparison tool, you can easily compare what a commercial customer pays per gallon to what a residential customer pays for the same usage. And you can display that information for any class, meter size or volume of consumption. Also use the Community Cost Comparison to analyze how customer classes would be affected under a new rate structure (developed using RCalc), and see how the results compare to current revenues.

Where to find the Community Cost Comparison tool

You will see this new feature in the Rate Calculation and Analysis level in Waterworth, at step 5.8. Feel free to reach out to us for more information about the Community Cost Comparison tool, or any other features that Waterworth offers. We’re here to help you work towards a financially sustainable system.